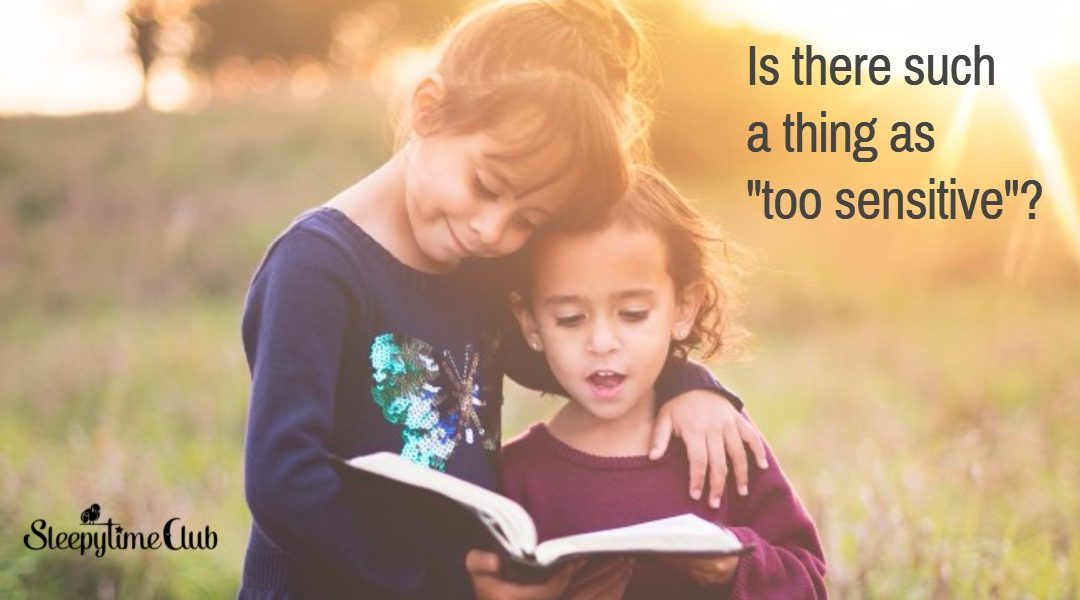 Back in July, I wrote a piece for the Huffington Post on why bedtime is a parenting priority. In case you missed it, here’s the link.

Now it seems things “out there” have gotten even harsher.  These are not the values any family wants to have their kids exposed to.

And it reminded me of hearing comments around the playground and even in my family of origin about kids who were “too sensitive”.  Often these are accompanied by the comment that we should “toughen up.”

I don’t think the world needs more tough people, do you? I think our true, loving natures are what need to be honored. That’s why every Sleepytime Club bedtime kit begins with the Cuddle Up and Snuggle Up song, affirming we are all Children of Light.

There’s a family picture of me at age 6 that still sends me a message. It’s posted on a collage that hangs in the bathroom of my father’s house. Next to goofy beach poses, holiday gatherings, and their friends mugging during parties, it stands out.

In the picture, I’m standing on top of a large granite rock crying. My older brother, a few inches taller, has his arm around me while looking down at me while laughing.

That’s just part of the story frozen in a photo. Here’s what preceded it.

We’d gone on a family fall foliage drive up from the south shore of Long Island to Bash Bish Falls. I had no idea where that was at the time. Now I know it’s in the southern Berkshires in Massachusetts.

At six, all I knew was that it would be a long drive and that I could daydream out the car window – one of my favorite activities even now.  And when we arrived at our family destination, there would be waterfalls that bashed and bished.

I had just gotten my first camera. It was a hand-me-down from a much-older cousin. A Brownie. Its old-fashioned style charmed me. The lesson I received from my dad about how to carefully wind the film around the spools, cautions about how while it was a hand-me-down, it was a real camera. That was quite a privilege for a 6-year-old.

That Brownie sat on my lap during the long drive up to Bash Bish Falls. The promise of capturing the splendid foliage filled my imagination.

Astonishing how children see past the practical! That Brownie came with only black and white film.

When we arrived at Bash Bish Falls, we first went on a walk through the woods. I was so excited, this was the first time I would be able to capture the magic of nature on a camera.

After our walk, we unpacked out picnic and ate together. Then my father wanted to get a shot of us on top of that big granite rock that I mentioned before.

The rock was huge – nearly twice my size. Maybe larger. I was wearing a fuzzy golden brown jacket, maroon leather shoes with very sensible buckles, and my prized Brownie camera around my neck. Someone hoisted me up, their grip slipped, and I slammed into the granite rock. Not really bruised.

The face of my camera was shattered and I started to cry. For some reason, everyone thought it was adorable when I cried. My brother clearly thought it was funny.

And I can’t begin to tell you that for a child, there’s torment in those moments. The torment is made worse when you’re told to “get a sense of humor”, “toughen up”, or worse “you’re too sensitive”.

Which is what I’ve done, ensuring that no child in my care in my classes, or in my home would ever be labeled as “too sensitive.”

I forget about that picture most of the time – even when I’m in my father’s bathroom I tune it out. But current events have me thinking: maybe we’ve all toughened up a little bit too much.  Maybe what’s “out there” is a reflection of what goes on in our homes and classrooms.

In The Five Love Languages of Children, Gary Chapman and Ross Campbell expand on their other popular “Love Languages” books. Kids need to have the affirmation that they are loved for who they are. Right in that moment. And that kids with “full love tanks” grow up to be more confident and compassionate adults.

There’s no need to be “toughened up”. Life may hand us some tough circumstances, for sure. But the healthiest way to respond isn’t to toughen up but to have courage. And courage comes from the 12th century French corage, connoting “heart, innermost feelings; temper”.

Dr. Brené Brown has a lot to say about the true meaning of courage on her site Courage Works.

Instead of asking us to toughen up, let’s encourage children. Encourage them to embrace who they are and who others are.

I’d like to add a very important note here: My older brother is one of the most compassionate, caring people you’d ever meet. He does nothing but encourage those around him and displayed enormous courage in his own life. He lives from his heart and has apologized to me for those moments when he laughed at me for crying.

Rather than shaking one’s head at the “too sensitive” child, let’s respect what that child has to offer. An observation from the article in British Psychological Society’s Research Digest is this:

“The intriguing take-home message according to the researchers is that ‘the very quality that appears to be a frailty in [some] children may also be their strength, given a supportive parenting context.”

So it turns out, in these times, “too sensitive” can be a strength. And something we can reinforce at bedtime when the turmoil and busyness of the day can be set aside and we can affirm that every child – every adult – is a Child of Light.

You can get a taste of what it’s like to end the day with peaceful, encouraging intentions for your family by downloading Stars, Sleepytime Club’s first bedtime kit, for free HERE. Just click “Give it a Try”.